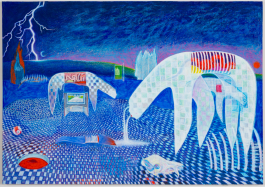 Ronan Day-Lewis is a painter and award winning filmmaker. Graduating from Yale University with a BA in fine art in May 2020, he directed a trilogy of videos for a new Philip Glass album the same year. Day-Lewis’s visual art, which Cool Hunting wrote "succeeds in transporting visitors into a universe unto itself", has been featured in publications including Artnet, Cultured Magazine, Hyperallergic, Vogue, LAist, Office Magazine, and Whitewall, and was the subject of two solo exhibitions this year in NYC and LA. In 2021, he was commissioned to direct an album video for an EP by David Chalmin, who is also the composer for Day-Lewis’s upcoming feature directorial debut. Recent projects include a group exhibition of emerging artists at Sotheby’s, and a two-person exhibition with Lena Christakis at Spring/Break Art Show. 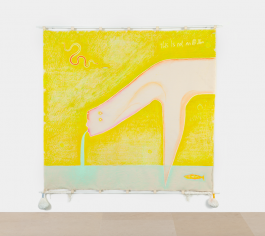 Lately I’ve been using oil pastel on unprimed canvas, either stretched over panels or over stretcher bars for bigger paintings. I’d say my work is a sort of uncanny extension of the landscape genre. I usually start with a photo I took of a real place, often one that is personal to me in some way. In the process of developing the image, the “real” external setting gradually merges with an internal one as I inject it with my own invented mythology, a lexicon of recurring objects and humanoid, quadrupedal creatures. Finding the creatures’ forms has been like putting figuration and self portraiture in a blender in the hopes of finding some hidden essence. I guess that’s what I’m looking for in my work, a way to peel back the skin of everyday existence and see what’s underneath.

When I try to put my finger on that I often draw a blank, but some people and things which have been floating around in my head are Miyazaki, Bob Thompson, romanticism, medieval tapestries, Christina Quarles, melancholy, Bonnard, Don't Look Now and other horror movies, Pan's Labyrinth, the Divine Comedy, music, the uncanny, bacchanals, the house where my mother grew up, memory, anxiety, Americana, death, adolescence, water, the pastoral, the desert, the sublime, Bosch, Paris, Texas. 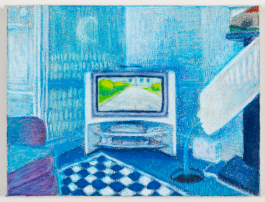 Can you talk further about how colour and narrative inform your work and the emotional responses they generate?

Colour has always elicited a pretty intense emotional response for me. I think the colours I use in my paintings are what have the biggest impact on how they make myself and others feel. Often when I’m working on a new painting, I’ll get this elusive sense that something isn’t right; I slightly tweak one of the colours, and suddenly the work has a completely different feeling to it. I’ll get a rush of relief, euphoria. The narratives in my work tend to develop organically as I add different figures and elements. I'm a filmmaker as well as a painter, so stories are important to me, but I also love ambiguity. I try not to force a single idea of what's going on, to let myself live in the mystery. But at the same time, I like to leave little breadcrumbs, clues that viewers can grab onto and form their own interpretations of. 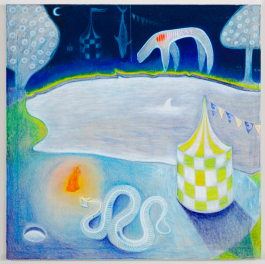 Really important, in the process as well as the final form. The way the oil pastel feels in the hand when it slides over the tooth of the raw fabric, the tension behind the canvas depending on what kind of support I’m using, and visually, the sort of hazy, velvety, glowy texture that can come out of it is very specific and different from what a paintbrush does on gessoed canvas. The hand is closer to the mark, you feel every hill and valley of the surface. 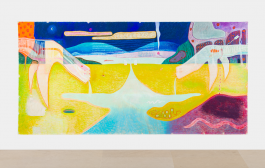 At the moment, the oil pastel. A close second would be Schweppes seltzer. 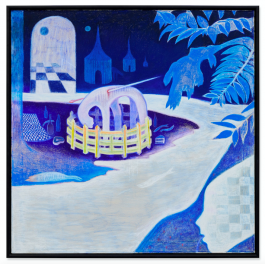 Can you give us a book recommendation that has been important in your practice?And tell us why it’s important.

Dante’s Divine Comedy (Inferno if I had to pick one). I took a class on it in college and it blew my mind. The way it transposes an intimate, intensely personal journey on these vast, mythic ideas of purgation and deliverance. 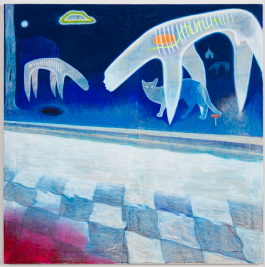 I have a show coming up early next year at a great new artist-run space on the lower east side which I’m making a large-scale sculpture for – I can’t share details yet but it’s gonna be a big challenge and a step outside my comfort zone. Fingers crossed, I’m also gonna be directing my first feature film in the near future from a script I wrote.