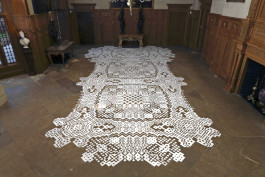 Catherine Bertola (born 1976) lives and works in Newcastle upon Tyne. Her work spans installation, drawings, photography and film, and is often produced in response to particular sites, teasing out overlooked histories the work gives voice to untold narratives, excavating the past to confront contemporary inequalities.

She has been commissioned and exhibited with organisations such as Leeds Museums and Galleries, V&A Museum, Bronte Parsonage Museum, Whitworth Art Gallery, Arts&Heritage, National Museum Wales, Museum of Arts and Design (New York), Crafts Council, Government Art Collection and several National Trust properties. Her work is held in a number of public and private collections. 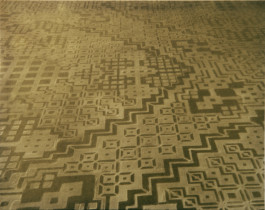 As a child I have a vivid memory of walking around a large stately home, and being obsessed with looking for secret doors. I can’t recollect what might have piqued my curiosity in this way, what drew me to the idea that there was something more to things than I could see. Now over 30 years later, this fascination still permeates my practice. As an artist, I make site-specific installations, drawings and films that address the invisible histories of women, whose roles and contributions to society are overlooked and undervalued.

Work always starts with research into a place or archive material-whatever that might be. Out of that, ideas emerge as connections are slowly made between unearthed narratives, imagery and materials, as well as my own lived experience. Time to slowly allow ideas to percolate is really important, whether that’s when I’m working on commissions or making work in the studio.

Past work has often been temporary and precarious, with installations disappearing almost as quickly as they were made, this temporality has been an integral part of the work, the circularity of it both responding to history and then in turn becoming history. More recently I have begun to work with film, using dancers as a way to feel and explore space, to convey ideas and relationships with domestic space, drawing on my own experiences and frustrations with the lack of value placed upon the hidden labour of domesticity and care. 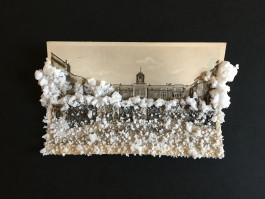 What influences my work changes all the time, depending on what I am working on.

As a younger artist, I was drawn to the work of Cornelia Parker and Rachel Whiteread for a number of reasons, not least because they were women working with sculpture.

My first physical encounter with Whiteread’s work was on a trip to Madrid in 1997, where she had an exhibition in a pavilion in the middle of a park. The show included One Hundred Spaces and other early cast pieces of furniture. It was really important and powerful experience at the time, validating the use of domestic references, and giving me confidence to pursue those ideas in my own work, which felt very disapproved of.

Around the same period, I also vividly remember seeing Cornelia Parker’s Feather from Freud’s Pillow (from his couch), a photogram of a single feather take from Freud’s couch. I recall being mesmerised by the way such a small almost insignificant object had been transformed so potently. It resonated with ideas I was wrestling with at the time around ephemerality, found materials and place.

I also often return to Francesca Woodman’s photographs, they capture such a charged physical relationships between her body and the spaces she inhabits, which I find so compelling.

Other wider influences come in the form of history books, collections and archives, which are often where the seeds of ideas emerge.

History forms the basis of your work, often within the context of historical places and buildings where the seen and unseen or toil and labour associated with a place is often drawn out by you to tell stories that rebalance narratives, can you talk further about this?

My work has always been interested in the past, long before I started making work in historic buildings and places. For me there is always something ungraspable about the idea of the past – you can see it but can never quite catch it, it’s always slightly out of reach.

Early works drew on a fascination with forensic science - the magic of dusting a surface to reveal a story of a place through the evidence of touch left behind. It’s this curiosity in uncovering the hidden to better understand what has gone before that has always driven the work I make. These underlying

Overtime, my work has become increasingly more politicised, in part as a reaction against how history is presented from very singular perspectives, and a desire to give voice and visibility to those ignored by official accounts. Recent work is also increasingly fuelled by my own experiences and feelings of invisibility, particularly since having children, and the impact that the lack of value and acknowledgment that the cost of unpaid work has on the lives of women.

Although I work across a range of mediums, my practice is rooted in sculpture. Materials are central to the work I make, chosen for how they add meaning to a work through their historical significance, innate physical properties or how they resonate with a particular place. The material often comes first, before I then work out and feel my way through how I am going to use it.

Some materials I return to frequently, like dust, which I have used in numerous drawings and installations. My fascination with this material is in part due to its aesthetic qualities, but also in its forensic value, and associations with time and domestic labour, that further enrich the reading of these works.

My recent exhibition ‘Below the Salt’ at Temple Newsam House, Leeds included a number of works that used table salt in their production. The work in the exhibition explored the way hierarchy was expressed through the use of materials and architecture within the property. Salt became significant, because of its value in the 16th century, and how it was used to demonstrate the status of people within the context of household dining. A temporary elaborate installation was created with salt on the floor of the Great Hall, before being documented and swept away. Small amounts of this salt were then used to create a series of traditional photographic prints that act as a permanent record of the intervention. Other work, Fixed Transience, explored salts preserving properties, by saturating old postcards in salt, the crystals cling to the surface, rather than conserve, obscure and destroy the image.

I use a range of different materials and processes in my practice, so the tools around me change depending on what I am working on at the time. Over the years, my scalpel and cutting board are probably the most well used tools in my studio, they are used to make all the stencils and templates for producing installations. I have had the same Swan Morton handle for years, but my cutting mat has seen better days. The means to make good coffee is also a fairly essential item in my studio, to help keep hands warm on cold days.

The Yellow Wallpaper, is a short story written in 1892 by Charlottle Perkins Gilman. It charts the story of a woman confined to an attic room to convalesce after having a child, over the course of Perkin’s book the woman’s mental health declines and she starts to become obsessed with the wallpaper, as her psychosis and depression deepens, so does her relationship with the pattern on the walls. It is a book that has lurked about in the background of my practice since I was a student and first started making work that explored and intervened with the domestic space. It’s a book that overtime has become more potent, and I recently revisited it as a starting point for developing a new collaborative film work.

I am just in the final editing stages of a new film work, which I am really excited about. Last year I was awarded a Developing Your Creative Practice award from Arts Council England to expand the collaboration with choreographer Gerry Turney and dancer Mati Laborde Torres that was initiated in the film In the Between Space, produced for the recent solo exhibition ‘Below the Salt’, at Temple Newsam House, Leeds. Once it is finished I will be organising some screenings and seeking out opportunities to install and exhibit the work. It feels strange, but equally refreshing to be making work on this scale that is not for a particular place or project, to have the opportunity to play and not have to pin things down too prematurely,

I am also working on my long overdue website, which has involved sifting through my 20 year archive of images and projects, so I have been spending time reflecting on my practice and how it has evolved over time. I’m looking forward to sharing it with the world soon (www.catherinebertola.co.uk). In the meantime I can be found on Instagram @catherinebertola

In the Between Space. 2020. Digital film stills.