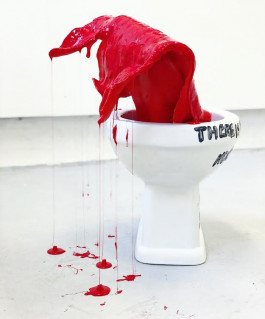 Karen Tronel is a British and French artist who lives and works in London. She studied Fine Art at UAL and graduated with an MA Fine Art from Chelsea College in 2018.
Her practice spans a range of artistic processes including painting, sculpture, large-scale installation and moving image, combining a variety of materials, narratives, mediums and techniques.
Tronel’s work is underpinned by a potentiality for radical forms that shape our social and imaginary existence, yet, they remain irrational, non–sensical, awkward and often absurd. Humour is deployed with an estranged familiarity to everyday indifference, whereby the experience is aligned to a soft-grotesque form of discovery; an ongoing fascination dedicated to the shared complex experiences of people, bodies and organs. Working through a self–authored script, Tronel creates individual environments of objects, images and conversations that may be constructed as unfamiliar, yet find space and momentum to express disagreement, expand on language, behavioural cues and slanted perceptions.
SELECTED RECENT GROUP SHOWS:
“Venomous” at D Contemporary Gallery; “Through The Mirage” at the Fitzrovia Gallery; “Euphoric” curated by Procrastinarting; “Karen Tronel London” (Pop up Gallery); “In Reverie” at Maxilla Space; “Domesticity And The Feminine” curated by Joséphine Bailey; “Prints and Multiples” at Fiumano Clase Gallery London; “Summer Exhibition” at Fiumano Clase Gallery London; “Discoveries: The Biting Point” at Fiumano Clase Gallery London; “The Illusion of Truth” at the Taipei Artist Village, Taiwan; “Gestura” at the Koppel Project Central; “Perpetual Shift” at the Koppel Project Soho Gallery; “Memories” at Burgh House and Hampstead Museum; “Move” at Maxilla Space; Gavin Turk´s Group “Portrait of an Egg” Exhibition, Photo London at Somerset House (WINNER Public Vote); 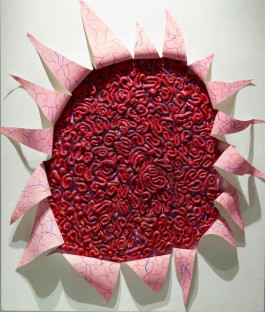 The work usually starts with an idea, a concept, a question, a story, a sentence or something that makes me laugh, which I feel compelled to capture or explore further in a physical form; generally something that will keep coming back to me until I know I need to do something with it. Sometimes it just requires writing it out or working through the idea in my mind. If I am able to resolve it in this way, or come to some conclusion, then it feels like the work is done (even though I haven’t actually made anything) and there is no need to pursue it further. If the research process has led to further reflections and scope for development, I will be inspired to explore this through making. This process will generally involve editing the idea (and often the piece itself as I progress) down to its core essence, its fundamental question, whilst experimenting with the best physical medium to make the work. 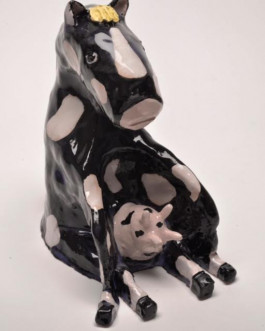 My biggest Art influences are hard to narrow down, but would perhaps be those I was earliest exposed to, notably Dada, Surrealism and elements of Pop and Op art, however my deeper interest in art and artists is broad; Bosch, Bacon, Basquiat. Barney, Lam, Soulages, Lucas, Kippenberger, Chapman Brothers, Kelley, Goldin, Hesse, Cattelan...are just a few.

Other big influences are Film (Luis Buñuel, Nic Roeg, John Waters, Spike Lee, David(s) Lynch and Cronenberg), Literature (the French Existentialists, the Russian classics, the American Beat writers and poets...the list is long), Music (early punk amongst many others), Fashion and fashion movements between the late 1960s and the 90s (including the street and club scenes from Psychedelia to Leigh Bowery) and certain forms of absurdist comedy. I am possibly however most influenced or inspired in my work by the everyday, the challenges of our current contexts and the incredible people I continue to meet over time.

Your exploration of society through a distorted lens plays a central role in your practice often utilising a range of varying processes and materials. Can you talk a little about this?

I’m often drawn to looking at things from a different angle, taking a step back to observe them from an outside perspective – ‘what would someone/something landing on earth for the first time think of this thing?’
The answers to this can certainly transform the banal into the humorous and raise a lot of further questions along the way. As such, one aspect of my work involves pulling things apart and putting them back together in new configurations observing each of the components in the process to explore meaning and provide altered contexts. This can sometimes relate to physical objects, which I may void of their intended use and infuse with new purpose or total chaos, but I will often apply this process to elements of language and communication, common verbal expressions, social rules and behaviours, traditional hierarchies or widespread stereotypes that I want to question and unpack. 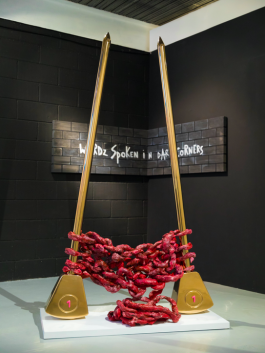 The chosen processes and their related materials vary according to the piece I am making. Sometimes the work will start as a drawing and develop into a painting or a sculpture depending on how the idea evolves and how I want it to occupy space. Every material has its own language and tradition and will bring its own meaning to the work. Occasionally it isn’t possible to distill the idea into a single image or a 3D piece and it will then take the form of moving image with sound or a composite installation although it hadn’t started out that way. It is the material which will determine the physical possibilities and limitations of the piece, its sensory manifestations and its ability to express and develop the idea as I make it. The material (or my sometimes unusual combination of materials) can also change the idea as the work progresses.

Interestingly, during the first lockdown in 2020 when I had no access to studio or materials but an urge to make, I accumulated various everyday materials and waste that I wanted to transform or use but without any specific idea of outcome. The making process was purely guided by the materials themselves, a physical interaction uninfluenced for some time by intellectual input or decision. Gradually, through experimentation, things came together of themselves and have resulted in two bodies of work that are new aspects of my practice and which acquired their own narratives in the process.

Maybe silence. I don’t tend to listen to music while I am working in the studio and prefer a quiet environment to give space to my thoughts and imagination. In the past I have often worked in noisy open spaces and do enjoy the buzz of other artists working around me and the collaborative opportunities this offers, but I would often then also work late through the night when everyone was gone – the deep of night was the best most creative time to process ideas when it was silent without distraction. 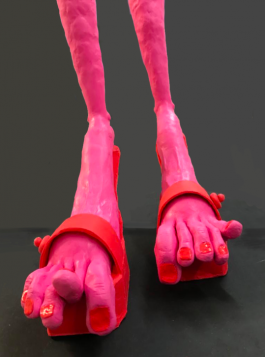 I have often found artist and writer interviews and biographies helpful in that they expose the challenges and idiosyncrasies relating to solitary creative endeavour; recognising in the account of others some of the familiar struggles, peculiarities and breakthroughs in the creative process and their particular impacts on everyday life can be enlightening. Sometimes, when working late through the night to meet a deadline, Stefan Zweig’s extraordinary biography of Balzac and the author’s famous caffeine-fuelled nocturnal writing practice comes to mind. It’s a fascinating read.

There are a few exciting group shows coming up later in the year for which I am currently making new works. I will also be shooting a new short film in France in the summer and in the Autumn will curate a group show as part of my pop up gallery (Karen Tronel London www.karen-tronel.com/karen-tronel-london) which I enjoy doing once or twice a year to exhibit works of my peers and foster new collaborations within my artist community.