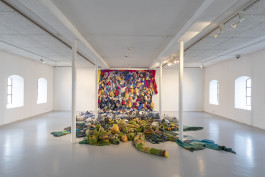 Elin Melberg (b. Stavanger, Norway, 1976) graduated with a Masters of Fine Art from the Royal College of Art (London) in 2002. Since 2003 Melberg has lived and worked in Stavanger, also co-directing the artist-run project space Prosjektrom Normanns (closed 2020). She is co-founder and co-owner of the creative working space ELEFANT in Stavanger. Melberg receives a 10-year working grant from the Arts Council Norway.

Melberg has several done several public commissions in Norway. The past years she has also made textile set designs for stage productions like Elle Sofe Saras « Vástádus eana - The Answer is Land» (2021) and Dybwikdans´ «MÅNEmåne» (20199 and «Bakom Stjernene» (2022). 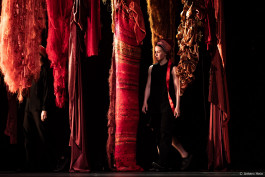 Accumulation is central to my artwork, in which distinctive, time-consuming compositions are created module by module. In my textile works, I weave memories and expressions of time into what I want to be fragile and personal works of art. Physical dimensions are key to one´s appreciation of my pieces, playing an important role not only in terms of the gallery itself, but also in the onlooker´s perception of my artwork. I have a very intimate and detailed working process, often sitting with my soft textiles in my lap, doing stitch by stitch or knitting, everywhere I go, whether I am at home, in my studio or traveling. It's always with me during this process. All parts grow together in my studio, reaching another physical dimension and becoming something different and often monumental in size. 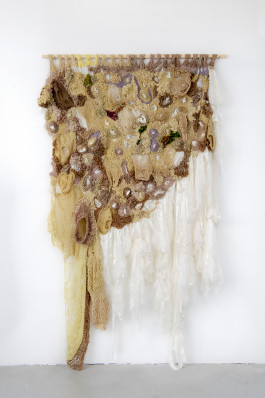 I grew up with a grandmother who aspired to working independently in the textile industry. At the time, this was not allowed, and she was made to attend the local School of Handcrafts before going on to work in a textile factory, where everything produced had to be of utilitarian value. I inherited enormous quantities of textile materials from my grandmother which I often incorporate into my pieces as an independent artist - something for which I am largely grateful to my grandmother´s generation and all that they fought for.

During my teenage years, my grandmother and mother both did their utmost to get me to enjoy sewing and knitting. I refused. I was tired of wearing striped machine-knitted sweaters and home-sewn clothes. I had no interest in knitting or sewing. If a hole appeared in my clothes, I would “repair” it with a safety pin.

After obtaining my Master´s Degree at Royal College of Art, I began to work on detailed installations and sculptures. They typically involved time-consuming processes containing thousands of details and repetitive steps. Small pieces of material in gigantic format. I sought to float between being in control and losing control, exploring the vulnerability which exists on the borderline.

In 2013, my father became seriously ill and passed away. This was a difficult time in my life and my artistic needs took on a different form. Six months after my father´s death, I opened an exhibition entitled “Float” at Galleri Opdahl in Stavanger. This was my way of processing my grief, by being present in an artistic work process and drowning in materials. I felt a distinct need to become more tactile. What had felt right just a matter of months earlier, now felt unnatural. I wanted to work with soft materials as opposed to hard materials. I was seeking a different type of closeness. This resulted in my shift towards increasingly textile- based works of art.

It was at this exhibition that the work “Elove” was shown in 2014. In it, I embroidered the final text message that I had received from my father, after his cancer had spread to his brain and he had lost the power of speech. The work signifies a conceptual turning point in my choice of materials for my artwork up to this point.

I suppose all of these experiences underline my main focus and influences; heritage of techniques, «typical female handcraft», lineage, personal grief, loss, memories, vulnerability and sustainability. 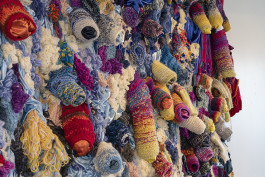 Your work in recent years has taken on the form of amorphic, highly textural and all encompassing sculptural formations, can you talk further about this?

Over the past few years, I have chosen to immerse myself increasingly into exploring sculptural textile works of art. The process is akin to my work with monumental sculptures and installations. Both are long, detailed processes involving embroidery and knitting, one stitch at a time. Presence is paramount and the accompanying handcraft is significant. I seek a vulnerable transparency in my textile works, rather than hiding away. My works are not supposed to be seen as technically perfect. Whilst technical perfection is important to other artists and to their creations, it is conceptually misplaced in my artwork. I will deliberately drop stitches, knit using four or five yarns at once, sew and knot and attempt to create a presence which is far from perfect, but which is beautiful whilst fragile and imperfect. This is art mimicking life itself. I value this traditional female handcraft, and I want to challenge it into becoming something else than what one traditionally perhaps expect.

In recent years, for example, I have challenged my textile works of art in terms of scale. “Enfolded” (2020) and “Jæren” (2021) have come to fruition whilst we have been living in the midst of the pandemic. In both of these pieces, the parallel long and close-up work process is key; I seek to preserve the moment, to allow time to stand still in the piece; there are no longer any changes in light or in form, there is no decomposition. When shown in a space, the result of the intimacy between my working process and myself transform into something else - I lend it to the viewer - and I move on to the next piece.. 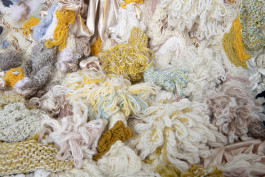 This is of immense importance. This past half year I have begun to plant dye the yarn that I use. I collect plants from my walks in the great outdoors and experiment with them. So far I have plant dyed yarn utilising the family Christmas tree, large fir cones from the forest, spinach, avocados, cochineal, madder. This has resulted in several nuances of colour ranging from yellows, greens, reds, pinks to browns. The arrival of Spring, Summer and Autumn will see me continuing my work, collecting and dyeing natural materials which I will incorporate into new textile works of art. I have always shown a keen interest in gardens, greenhouses and perennials which are handed down from one generation to the next, from one garden to another. I reached a point where I had grown tired of the staid colours in industrially processed yarns. I wanted to intensify the artistic process and concept in my works by adding a new element, which also emphasizes my field of interest and concept. This in turn results in an even longer and ever-present process, which is both sustainable and natural. 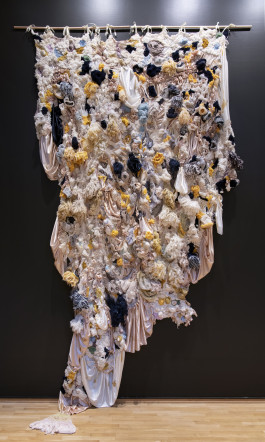 Yarn, needles and a good pair of scissors! 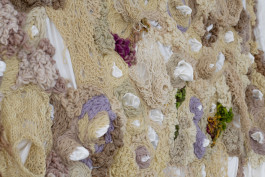 How to be a woman - Caitlin Moran

Such a liberating book about being a woman - funny, full of honest, wonderful and thrilling reflections on feminism. A compulsory read for both men and women I think. Being a female artist, you historically always have to work harder than men to get into collections, museums and galleries, all statistics show you so. Therefore I always find it inspiring to read a clever book that covers these aspects, struggles and perspectives in a refreshing way. It makes me want to work even harder and to believe in my projects.

On that note, I also want to highlight Men Explain Things to Me by Rebecca Solnit.

I am currently working on a new large scale textile/ embroidered piece, all plant dyed yarn, which will be shown at Galleri Formats (Oslo) stand at Enter Art Fair in Copenhagen, Aug 25-28th. It will be the first big project outside of Norway since the pandemic, so I am very much looking forward to meeting new people and catching up with older international relations at the fair. It has been very much missed!

Galleri Format, who will represent me, together with artist Eyvind Solli Andreassen: https://www.format.no