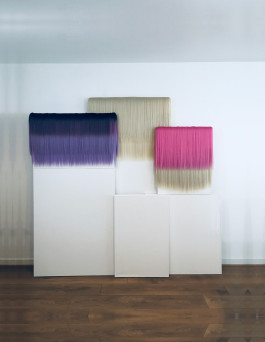 Elena Saraceni is an interdisciplinary Latin-American artist based in London UK.

The British based artist who has been calling London home for 12 years now, was born in Argentina, raised in Venezuela and brought up between Venezuela, Argentina, Italy, France and Uruguay. Notwithstanding, her fortuitous itinerant upbringing resulted in a culturally diverse multidisciplinary academic training and professional experience.

The Central Saint Martins Graduate and Artsy.net alum is an artistic polymath with a skilled background in art, industrial design, textiles, fashion, tech and their intersections. Counts amongst her eclectic array of countless professional anecdotes are working in couture embroidery at Alexander Mcqueen and as Curatorial Director and founder of Female Voices of LatinAmerica, the largest ever presentation of living Latin-American female artists.

However, a neurodevelopmental disorder forced Saraceni to delay formally establishing her artistic practice until later in life. It wasn’t until a few years ago that she started to make use of her broad multifaceted savoir-faire and made it bleed into her current practice. Her interdisciplinary approach is not just about her versatile knowledge of materials and construction but also conceptual. The recurring themes oscillate between how she perceives the world as a Latin American immigrant woman with a neurodevelopmental disorder, and the constant influx of references from diverse cultures that she has been exposed to from birth.

Just like Wabi-sabi appreciates beauty in the imperfect, impermanent, and incomplete; and kintsugi repairs by celebrating them to show the value in experience and history; she makes use of her dis/ability and peculiar exploits as a terrain of exploration, purposefully dismantling the pieces and contexts that have shaped her to understand them and repurpose them into physicality beyond the bounds of time and the limits of circumstance. 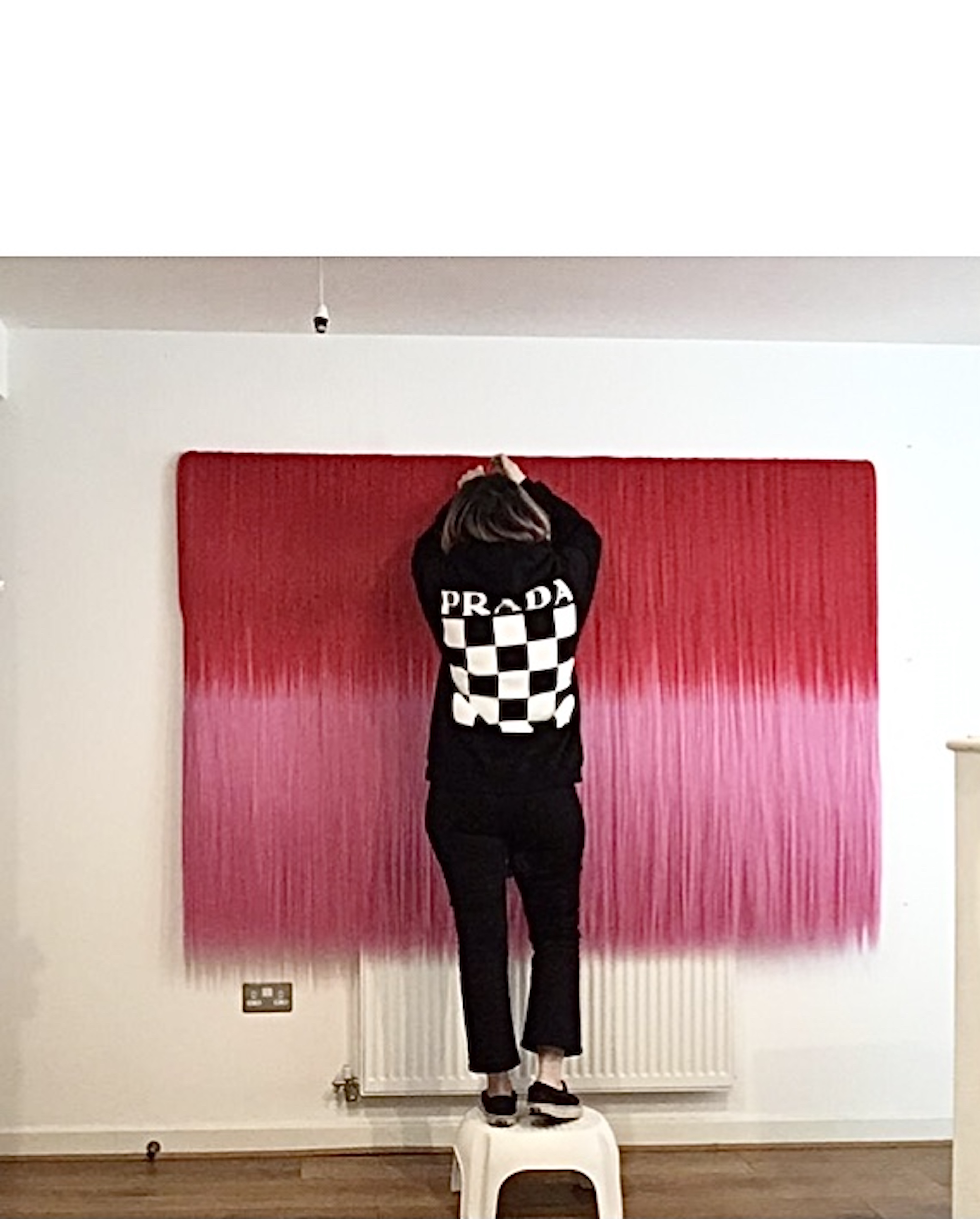 Can you tell me about your practice?

Currently, I am exploring how individuals project themselves in their surroundings with a term I have coined as Ornamental Symbolism. How people present themselves by means of populating their bodies with layers of decoration. I use anthropological principles to study the social performative rituals, cultural cosmetic elements and sycophantic behaviour we all employ to embellish ourselves with elaborate iconography and strategic manipulation to forge our own narratives in society.

Like “Masking”, one of the main negative coping mechanisms in neurodiversity. Masking, in very simplistic terms, is what neurodivergents feel forced to do to perform “at” life within the boundaries of normativity, by avoiding revealing the true self out of fear of being discarded. I make pieces that help me understand this façade that all of us, regardless of our brain function, employ on a regular basis. I translate informal materials into formal languages, thus allowing me to communicate my own internal soliloquies into these external self-reassuring visual components.

I draw upon an assortment of obscure references, materials, disciplines and outdated pop culture in an attempt to give shape to the constant noise in my head and my perpetual search for lucidity; sense of self and identity amongst self-definition; culture; heritage; westernisation; intersectional identities; migration; ethnicity; class; gender; dis/ability; ageism; cognition and belief.

A contemporary approach to philosophical elements of Naturaleza Muerta or Dead Nature, “Dead” meaning inanimate and “Nature” referencing a slice of life in any form, like an experience. Human nature, for instance as a depiction of a “slice of life”, to show a part of a human life in stillness. The actual origin of what English speakers call “Still Life” I activate textures, mechanics, concepts and objects that can be intersected, touched, accessed, lived via installations, assemblage, sculptural work and experimenting with the senses.

How do you get started on a piece of work?

I start with a feeling.

One of the aspects of how my brain is wired, is that it hardly stops, sort of like the millions of screens in the movie Minority Report every second of every day. With medical and environmental support, patience and research I manage to slow it down in order to be able to process the people and the world around me and even though that aspect is incredibly hard for day to day life, it is actually quite useful for creativity.

In that vein, my work and process starts as reactive. I see aesthetic potential in virtually everything, sort of like the kid in the movie The Sixth sense but with contemporary art. It’s hard to explain and even harder to communicate what you see, where you see it and why. In order for “whatever it is” to end up as a physical work of art I go into metaphysical mode in a matter of seconds. Examining this reality’s identity and change, space and time, causality, necessity, and possibility.

So, imagine the above concept being dissected in seconds to a couple of minutes in Minority Report screens mode that is in parallel, sort of 3D printing this invisible virtual reality sample study in front of me.

This over the top convoluted explanation is mostly my process. At this point, I have it all worked out apart from logistics and affordability. So depending on what the end goal is, I can just go ahead and do it or add a layer of friction to compress it all to a more digestible size by exploring the best translation of that initial imaginary sample and not sacrifice its essence. 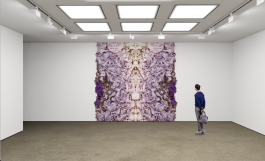 The song that was playing when...
The jacket worn by...
The flowers in...
I’m constantly pausing films on a Friday night to take a photo of a character’s wallpaper for example. 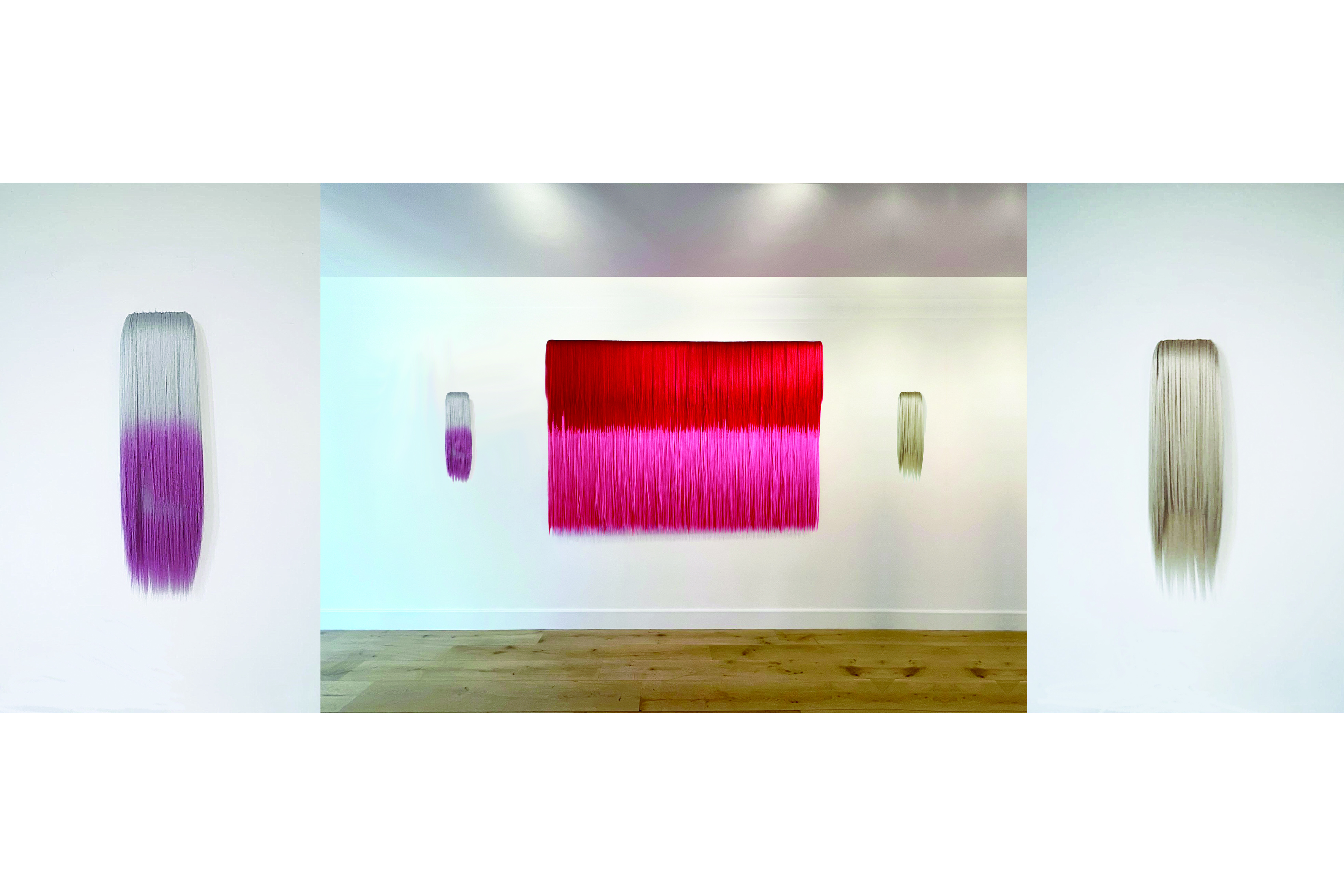 I first encountered your work at Unit-1 Gallery Workshop where you exhibited in the group show for Fair Art Fair Curated II - Womxn' showing a work from your "Hairpiece" series. Can you tell us more about this series and the meaning behind the works?

“The Hairpiece Series” is an exercise on decontextualization to question meaning.

Hair, in its regular context, is a source of conflict when it comes to meaning and value. To paraphrase Jonathan Van Ness: regardless of someone's socioeconomic status, the common thread is always the consequence of confidence in keeping up with patriarchal standards. Hence the added value, meaning and power that we end up putting on hair to defy conventions, keep professions, fight rejection through endless upkeep, rinse-repeat and beat.

A tool most are forced to use for the purposes of submissive integration in response to unnecessary conflict. In layman's terms, using hair or even the lack of it to fit into someone else’s narrative but in return, it forces us to reject ourselves, our identity and in turn all of that which forms the compendium of who we are as unique individuals. Our background, our traditions, our identity and self-worth.

Lately, I gladly sense that there is a renewed awareness about celebrating the importance, meaning and value of hair as a piece of iconography that forms an individual and not as a tool for submission.

Taking into account all of the above, I wanted to purposely find a way to create a hair display with the least intervention possible so the viewer could have more to add to the experience without any traces of my preconceived ideas. In experiencing it this way, my aim was for a renewed meaning to emerge from within the viewer. 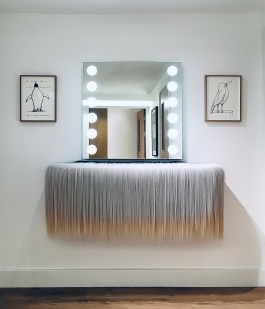 It is important in relation to its purpose, be it conceptual or functional. A material is only required to perform to its full potential for the role it was chosen to play. No more and no less. 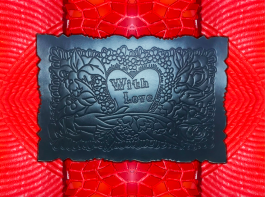 My favourite tool is the tool I’m using at the time.

Since my practice is so multifaceted, it’s not possible to pick a favourite. I also use certain tools or materials for new purposes and I sometimes make my own tools if I can’t afford them or what I need doesn’t exist. Looking around, on the surface, there’s a lot of different stuff to measure, cut, glue, staple, drill, sew, paint, draw, hammer. A big white board, multi-screen digital set-up. Making room for a new dremel.

Can you give us a book recommendation that has been important in your practice?

For me books are tools in a way. Be it for the soul, for knowledge, etc. They serve different purposes for different phases and moments in life, so nothing and everything is crucial.

I am re-reading my 15 year old copy of Infinity Net: The Autobiography of Yayoi Kusama. I relate to her way of searching for lucidity and how she tries to make sense of herself through her practice. There is a passage about how she modified the inside of a whole outfit to smuggle stuff into the States back in the day. Her train of thought on going about it offers a unique glimpse into how she thinks as an artist between want and need. After that on my list is “What Artists Wear” by Charlie Porter. And “The Story of Art Without Men” by Katy Hessel. Can’t wait to read them. 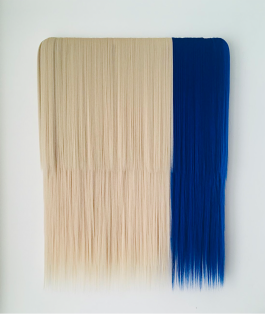 I have a few things in the pipeline that I’m currently working on like a piece for institutional acquisition next year and two private collections this year and a few collaborative projects, some focused on cross-continental artistic exchange and others centred on neurodiversity to improve public understanding and raise awareness on the subject.

After that I hope I can continue to make work with a social function, addressing aspects of life and culture from my own point of view and ordeal by providing aesthetic experiences that could educate, entertain, provoke or just communicate a thought; aiming for viewers to relate to it and possibly be influenced by it in a positive way. Give back and pay it forward.

I would love for any interested parties reading this to stay tuned by following me on instagram. @elenasaraceni1

Hairography 1, 2021, Mixed media sculptural installation
235x200x10cm
Created for the Govea Meoz Foundation to be exhibited as part of the Museum of Contemporary Art of Zulia, Venezuela (MACZUL)