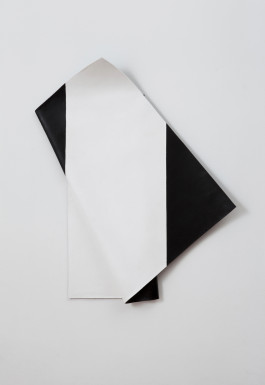 Deb Covell (b.1966, Stockton on Tees) lives and works in Teesside and is represented by Gray Contemporary, USA. She received her BA Fine Art from Liverpool Polytechnic and her MA Fine Art from UEL. She was a finalist in the 2014 Aesthetica Art Prize and her works are held in private and public collections including the MIMA (Middlesbrough Institute of Modern Art) Collection and the KNO (Kiev Non-Objective Art) Collection.

Covell’s practice is concerned with bringing a form into being by exploring the material and sculptural potential of paint. She has omitted a traditional fixed support of a canvas or wooden panel as she found them too restricting and influenced the direction of the work too much at an early stage. Instead, she keeps the making process as playful, exciting, and versatile as possible by using a method which is open to many changes and possibilities. All her work starts with her painting layers of acrylic paint onto stretched plastic sheets which are then peeled off to create a support. She then goes onto fold, crease, cut and collapse these paint supports thinking about gravity, weight, shape, surface, and colour and lets the natural behaviour of the paint take precedent until new three-dimensional forms emerge. 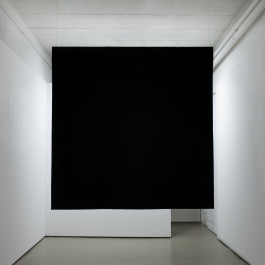 Fundamentally I am dedicated to exploring 'Painting' in its widest sense with a strong commitment to keeping it alive and relevant today. This obsession often leads me into unknown territory where I feel I’m working in the dark and relying on my intuition to look for clues on what steps to take next. Conceptually I am concerned with bringing a new 'form into being' that’s never existed before, and I predominantly use ‘paint’ as a material to explore this idea. I’m after a kind of ‘pure’ painting- free from size and surface restrictions that pushes away from the pseudo and any pictorial illusionism that a lot of contemporary painting still gets caught up in. This has led me to discard traditional paint supports like canvas and make my own instead by building up layers of paint onto polythene sheets that are dried out and peeled off to create an acrylic paint ‘skin’ that I either use as a core material to manipulate into a three-dimensional form or to use as a surface that houses my geometric or monochrome compositions. 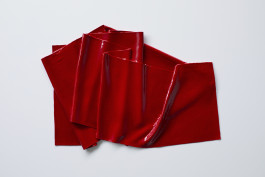 Influences and inspirations become relevant and important to me -mainly when I’m trying to solve specific problems in my practice or need a sense of connectivity in my studio. I find myself returning to the pivotal artists of 20th century abstraction- particularly the non-objective works of Kazimir Malevich, Piet Mondrian, Theo van Doesburg, Frank Stella, Robert Ryman, Richard Serra and Anne Truitt who all sought a factual 'realness' in their work - independent of any referential crutch.

I have become increasingly fascinated by esoteric, theosophical, and spiritual concerns in art -particularly in early modernism which I feel has been overlooked in favour of its more formal attributes. This fascination has led me to Yves Klein and his ideas around The Void, Agnes Martin - who explored beauty through ‘Inspiration’, Mark Rothko and his ideas around the Sublime, Josef Albers and his ‘Homage to the Square’ series and Hilma af Klint and her relationship with The Spiritual. The Californian Light and Space artists Mary Corse, Robert Irwin, Larry Bell and Joseph Turrell are also major influences on my practice and I love some of the works of the next generation of this movement in- particularly Olafur Eliasson and Anne Veronica Janssens’ large scale installations. 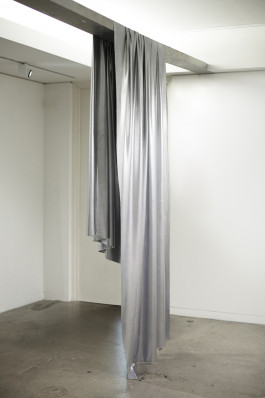 Can you talk about how the materiality of paint blurs the boundaries of your practice between painting and sculpture?

When I’m applying wet paint with a brush to polythene sheets, I think what I’m doing can be classed as ‘painting’ in the traditional sense, but once the layers of paint are built up, dried out and peeled off the polythene it becomes a robust, versatile paint sheet or ‘skin' that is capable of being crafted into a three-dimensional form. This hardened plasticised sheet is where I initially see sculptural elements seep into my practice.

I use a painter’s tools and materials to make the skins and I believe I have a painter’s sensibility, but this sensibility is stretched into something else when I fold, bend, and crease the skins whilst using weight, gravity, tension, and touch etc to direct the pieces   - taking the work further into the sculptural realm. Furthermore, the paintings often protrude from the wall or escape into the surrounding gallery space, which transforms the viewer from a passive spectator into a sentient participant through an active engagement with my three-dimensional paintings. This is akin to a experiencing a sculpture displayed in space, yet, despite these crossovers- I still believe what I’m doing is very firmly grounded in the ‘Painting’ genre. 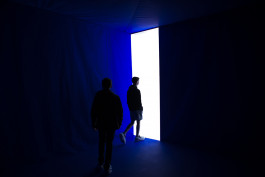 Materials and their uses are at the core of my work -particularly the substance of paint which can take on many guises and gives physical form to my ideas. Whether I’m exploring the sensual and tactile qualities of this versatile medium or dissolving the forms I’ve created with globs of paint or with non-tangible materials like light- material investigations are at the very heart of my process.

My ongoing ‘Red Heart’ series were intended to be given as gifts to embrace in the hands of loved ones who can’t be with us - especially in covid times. I felt virtual reality was never quite enough and was served as inadequate substitute for a real or haptic experience that I believe is at the very core of being human.

I’d say paint brushes are the most important tool to me in the studio. I see the brush as an extension of my body that allows sensual repetitive actions to take place. I like to keep the brush marks visible overall and evidence the tools I’ve used and the moment the marks took place. I use a huge variety of brushes including large house brushes that I often extend with a brush shank to enable a longer reach when necessary. I use a selection of small soft nylon or sable brushes to make my geometric works and slightly knackered old brushes to create a kind of ham-fisted visible mark in some of my sculptural tactile works.
Overall, I see the brush as an essential studio tool that bridges that important gap between myself and the surface I’m applying paint to. 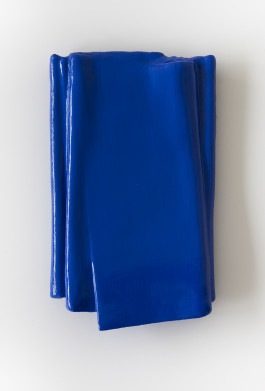 One of the best books I own is Spiritualism in Art: Abstract Painting, 1890- !985 by Maurice Tuchman. It was published alongside the ground-breaking exhibition with the same name in Los Angeles County Museum of Art. It’s like a bible to me in that it is a constant source of reference and inspiration and contains fantastic essays by some of the best writers in Contemporary Art today. The book addresses the importance of the spiritual dimension in contemporary art that has been undervalued by critics like Clement Greenberg and institutions like The Museum of Modern Art in New York. It was the first publication / exhibition to show the important female painter Hilma af Klint and since this publication she has had major shows around the world. Its’ a unique and comprehensive book on the subject of ‘Spirituality in Art’ and is as important today as when it was first published. Overall it addresses important historical gaps in the ongoing narrative of modern and contemporary art which I believe is essential to any student undertaking a career in fine art or art history .

Yes, I do! I have some very exciting projects and exhibitions in the pipeline. I’m delighted to be included in a two-person exhibition with one of Ukraine’s most important non -objective artists working today- Tiberiy Szilvashi. We will be exploring the direct lineage between our works and the Ukrainian born seminal artist Kazimir Malevich. The exhibition will take part in the fantastic M17 Contemporary Art Centre in Kiev in 2022. I have recently been invited to be part in an important exhibition about influential Northeast UK women by curator Michaela Wetherall who is a proactive champion of women rights. The exhibition pays homage to the Peggy Guggenheim ’31 Women Exhibition’ in New York in 1943 which was pivotal in that all the contributors were women.  I’m currently in the early stages of planning a survey
exhibition on the rise of British Constructivism dating back to Victor Passmore in the 1950’s with artist/ curators Paul Bramley and Allyson Keehan - which we hope to complete by the end of 2022.
I am also the final stages of creating a book about my work with the exceptional and very patient designer and Jo Deans. The book chronicles my painting practice over the last twenty years and will include some fantastic texts by eminent artists, writers and curators Elinor Morgan, David Goerk, Laura Gray, George Vasey, Anna McNay and Richard Davey with lots of great photos taken by Cathal Carey. The book is and funded by Arts Council England and will be published by Editions North.