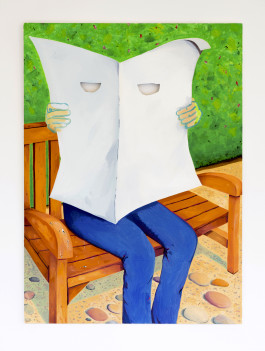 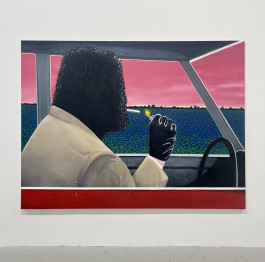 I make different things, including sculptures, but I mostly make paintings. Within my painting practice I have various bodies of work, but for this interview I’ll focus on the series that I’m making right now. Around 2008 when I was studying for a BA in Fine Art at Northumbria University I started making paintings of a character whose face is always obscured. Sometimes he would have a watering can on his head, a plastic bag, a flower pot or his own Christmas-themed jumper pulled over his face. I didn’t really know why I was making these or who the character was. The paintings were pretty vapid and dumb, and at the time I felt stupid for making them (much later, the art critic John Slyce would claim that I covered the head because I couldn’t paint faces).

After I graduated in 2009 I wanted to be taken seriously and became a bit obsessed with making ‘non-objective paintings’. Not to be confused with ‘abstract’ where a painting references the real world, my non-objective paintings had to be created purely through materials, so I would layer up paint, often 10-20 layers, sometimes over a couple of years, until something ‘interesting’ happened. Nothing interesting ever did happen and eventually I realised this was an unsustainable, boring and pretty insane way to make paintings.

While I was waiting for these non-objective layers of paint to dry I would make other paintings for myself, that I had no intention of ever showing to anyone. Most of these paintings were of the ‘masked’ character, so at some point I decided that this should be my focus and I should flesh it out and figure out why I kept coming back to it.

Today the masked protagonist in my paintings is known as the Great Assassin. One source of inspiration is the Zodiac serial killer, active in the US in the 1960s, who wore a strange masked suit of his own creation. The Zodiac – who was never caught – used the media to spread fear and increase his infamy. I am interested in the role of the media in shaping society’s politics, particularly in the context of Brexit and Trump: the promulgation of fear and anxiety around immigration, the undermining of expertise, and notions of ‘false facts’ or ‘post-truth’. I think a lot about the ways white men get away with abuses of power, often sanctioned by the cultural architecture of UK/US media and politics. The hairy mask/hood might be read in many ways, perhaps it references the racism of police targeting black men wearing hoodies, the French ‘burqa ban’, the KKK, ninjas (someone elusive). But the menacing undertone of the paintings is always undercut by the quiet or mundane nature of the settings the Assassin is placed in – eating ice cream, smoking a fag, in the car, visiting a picturesque landscape.

I’ll often start a work by quickly sketching a number of compositions, working through ideas at a very small scale, kind of like storyboard frames. If there’s one I like I’ll then translate that into a large-scale painting on canvas. I sketch digitally on my phone quite a bit, often to mock up details on the painting as I go.

It depends on the work I’m making, but I like to riff on the history of painting. For the Great Assassin series, artists like Edvard Munch, Sidney Nolan, Philip Guston, Nicole Eisenman, Paul McCarthy, and Dana Schutz are important. I recently discovered the work of Durham-born Canadian painter J.E.H. Macdonald as I’ve been thinking about landscape. I’m pretty obsessed with Kirchner. Film is quite a big influence, as I often think of the Assassin paintings in terms of cinematic scale and composition. Michael Mann, Scorsese, Noir and French New Wave in particular – I’ll pause films and take pictures of atmospheric scenes or strong compositions as reference images for Assassin backdrops. 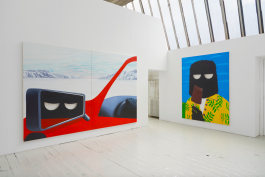 Humour is often used to interrogate and comment on a range of contemporary subject matter within your practice, tell us more about this?

There are a couple of paintings by Edvard Munch, one called The Murderer and the other Murderer in the Lane. These are dark paintings, literally and figuratively, and were a reference point for the Great Assassin. They show a hooded man looking directly at the viewer, and in one of the paintings there may be a dead body on the floor behind him. I guess I ask myself, if these Munch paintings were made with brighter colours and had the hooded figure in a Hawaiian shirt, or eating an ice cream, how would that change the reading of the work? I’ve made a couple of paintings entitled Feast and A Bigger Feast showing the Great Assassin eating a Feast ice cream. The titles riff on David Hockney’s Splash and A Bigger Splash, paintings that suggest an event has just taken place and we’re seeing the aftermath. The Feast works are painted in bright colours and at first glance look fun, but the sense of menace is there – the titles imply something may have been devoured and the character may have taken delight in it.

I actually don’t think much about ‘humour’ in my paintings. I think more about misdirection and use lots of references that mean something to me and that I think are relevant to the character and what the work stands for. The humour in them emerges from the absurd or odd. My partner and I recently had a baby and have been watching old episodes of Pingu with our son. Something about the show resonates with these paintings, perhaps its strange, language-less comedy, with dark moments amid icy landscapes. 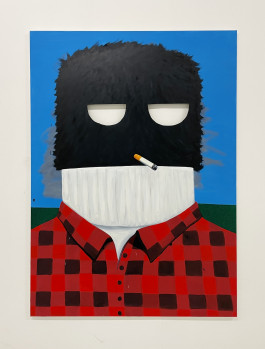 With the Assassin series, there’s this nice connection between the materiality of the work and what I’m trying to explore – the canvas is a surface for an image, but it’s also the kind of material that might be used for an actual mask. Philip Guston’s series about the Ku Klux Klan is a major influence on the Assassin work, particularly his painting The Studio where he depicts himself in his studio dressed as a Klansman while also painting a Klansman. In my paintings, the Assassin’s eyes are cut directly out of the canvas. The eyes are both there and not there – created from the negative space – and break the illusion of the painting, its ‘fourth wall’, by disrupting the surface. I made a few paintings (From Russia with Love, Staring at the Sun) where the Assassin’s mask isn’t visible at all, as he’s sat behind a newspaper, which has the eye holes cut out like an old school spy trope. The paintings’ masks/eye-holes can work both ways – for the character and the viewer.

When I’m making sculptures the relationship to material is different, even more specific perhaps. I made a series of flags sewn from the tote bags of global art institutions, hanging on poles placed in a makeshift metal stand (A Dream I Dream Alone), which was inspired by something I saw on a trip to Beirut. That work was about the posturing of the art world, notions of allegiance and the performance of power, and the arbitrariness of national borders. I made another series of life-size mannequins inspired by Hornby railway figurines, holding signs commenting on art. I used to make a lot of weird installed-object type work when I was younger, and part of a collective called Jambon, with Mike Pratt and Graeme Durant. 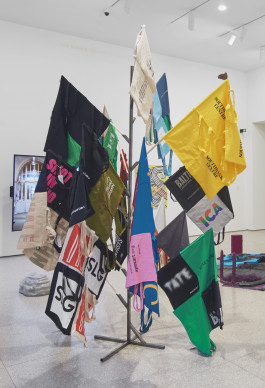 A paint tube wringer and a brush-cleaning machine.

Can you give us a book recommendation that has been important in your practice?And tell us why it’s important.

Why I’m No Longer Talking To White People About Race by Reni Eddo-Lodge had a big impact on me because it reveals the mechanisms and architecture of systemic, everyday racism that as a white man I hadn’t noticed or had to think about before. After I read it I started seeing it everywhere. It was like putting the glasses on from the movie They Live – the world suddenly looked like a different place. It should be compulsory reading in schools.

I recently read No.11 by Jonathan Coe which was an enjoyable satire about the UK post-9/11, the invasion of Iraq, and the death of David Kelly. As I write this Matt Hancock has just entered the ‘I’m a Celebrity’ jungle so it feels like several elements of the novel are converging in the present.

I’m into classic spy and thriller books, like John Le Carré (The Spy Who Came in from the Cold, Call for the Dead, A Murder of Quality) and Graham Greene (Dr Fischer of Geneva, The Quiet American, The Confidential Agent). I’ve been reading the James Bond novels as a sort of research for the Assassin work too, and find an interesting link to American Psycho, which is another book (and film) I like. Patrick Bateman and James Bond are both self-interested killers, obsessed with women, labels and luxury goods; one is seen as a British hero and the other is a psychopath, they both get away with murder. 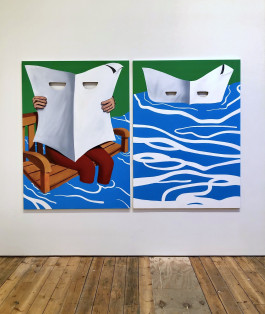 I’m working towards a solo show in London in 2023, with Jack Bell Gallery.